Tank: Home for the Holidays 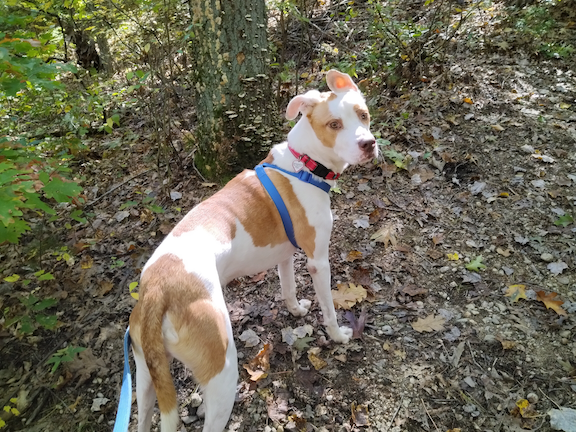 Tank is a friendly five-year-old pit bull terrier who arrived at Dakin in August.  He loved running around, squeak toys and sitting for treats.  His lopsided ears and goofy expressions charmed Dakin’s staff and volunteers from the moment they met him.

His unusual coloring (white with light brown splotches) made him stand out, and everyone believed he’d be in a new home quickly.  In the meantime, Tank was placed in the foster home of Dakin Volunteer Michelle Bennett while he was being promoted on social media, television, radio and more.

Michelle was warned that Tank was a genuine escape artist, and she found out when he sailed over her fence and went for a run (she eventually caught up with him, despite being in flip flops)  “He’s also brilliant at working doorknobs.  I saw him try to turn one with his front paws.  Everyone thinks they want a smart dog, until they have one,” she laughed.

Tank became settled in Michelle’s home and befriended her two greyhounds, Star Lord and Rocket.  As time wore on, adoption inquiries were coming for Tank, but each family saw something they weren’t seeking; Tank was older than what they wanted, he was bigger, or their resident dog (who was brought for a meet and greet) became nervous in his calm, gentle presence.

While we were grateful that Tank was in a terrific foster home, it was very frustrating that nobody was coming forward to adopt this sweet-natured boy.  Not too many years ago, most dogs would stay about a week at Dakin before they found homes, but national adoption trends confirm that animals now experience a longer waiting period in shelters.

It had been two months since Tank arrived at Dakin, and Michelle started thinking about keeping him as she “didn’t want to break up the bromance” between Tank and Rocket, who had become best buds.  But there was more to it than that.  Michelle appreciated Tank’s many attributes, which she listed as “Athletic, clever, easygoing, determined, affectionate, loving and smart.  He could solve calculus problems if he could figure out how to hold the pen.”

While Michelle had worked hard to help Tank find love and stability on his journey to adoption, it turned out he had already found his home.  We couldn’t be happier that these two now have the joy of each other’s company for the holidays and beyond.