(Animal Resource Counselor Eliza Fischer assesses one of the terriers)

The ongoing partnership between Dakin and St. Hubert’s Animal Welfare Center in New Jersey was confirmed again earlier this month when a team of Dakin staffers responded to an SOS from St. Hubert’s for help with a major animal abuse case.

On June 11 law officials removed 188 dogs, most of them Parson Russell Terriers, from a property in Kingwood, New Jersey.  A woman who was a former Westminster Dog Show winning breeder lived on the property with her partner.  The dogs were kept in the house as well as in two barns also on the grounds.  A few dogs had been allowed to roam in the fields outside the secluded home.

Conditions were grim.  Several dogs had already died, and most of the rest had lived in cages for years.  Several of those cages had rusted shut from neglect.  All the caged dogs had been fed, but nearly all had never been taken outside or socialized.  They eliminated inside their cages, and their only contact with people was when they were given food by the couple.  All of the dogs were brought to St. Hubert’s.

The next day, a 5-member team from Dakin, led by Director of Operations Karina King, joined forces with staff members from St. Hubert’s in medically assessing the dogs.  Everyone snapped into action.  Dogs were handled as humanely and efficiently as possible.  Vaccinations were given, and tests were taken for serious diseases.  Only about 10% of the dogs tested positive for Lyme Disease and there were no positive results for heartworm.  Teeth were examined to help determine the approximate age of each dog, but that process was made difficult.  “Most of the dogs need major dental work,” says Karina.  “Their dental disease is so severe that it made it difficult to know their true ages.” 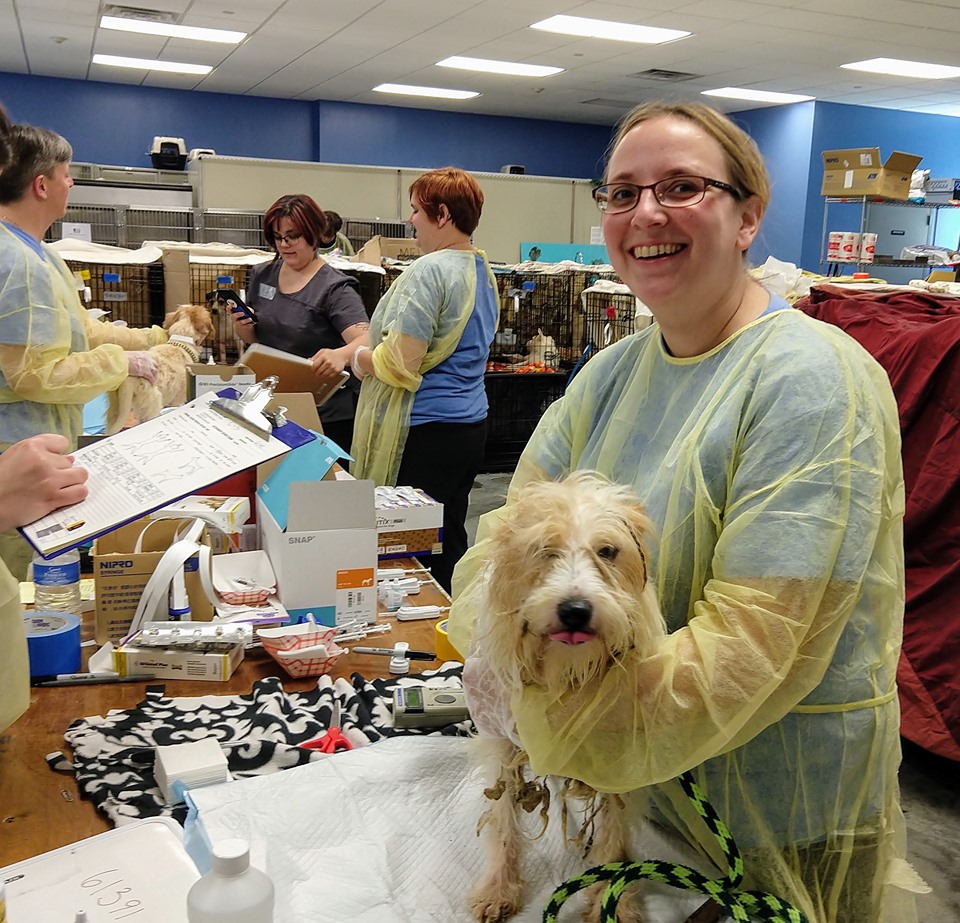 “Despite this,” she continues, “The dogs’ behavior was a bigger problem than their physical condition.”  Because of their time spent in cages, the terriers exhibited stress reactions including spinning around, repetitive head shaking and other frantic movements.

The Dakin team spent two days on-site helping staff and volunteers from St. Hubert’s assess the dogs.  Before heading north to Springfield, they packed up eight of the dogs to make the trek to Dakin.  Just before putting them into the Dakin van, Karina and team member Ashley Loehn carried two of the dogs to a grassy patch to relieve themselves before the road trip.  “It was incredible…these two dogs had never stepped on grass before and they had no idea what this surface was.  It terrified them.”

After arriving, the terriers were groomed by Carol White and their new look is startling to those who met them earlier (or saw the “before” photos).  Their mats have been shaved off, and their gnarled coats have been trimmed and cleaned.

To the observer, the terriers appear bright-eyed and engaging, but all is not what it seems.  “These dogs are comfortable interacting with people through a gate or a barrier,” explains Karina, “but when you open the gate and walk into the room with them, they’re petrified.”

Given their disposition and traumatic pasts, how can these dogs be expected to move on to a better life?  “We’re seeking very special adopters for them,” Karina states.  “We need people who have a great deal of experience with dogs with behavioral issues.  One thing that will make the transition easier for these terriers is if there’s a resident ‘helper’ dog of the opposite gender who can lead the way and show the new arrival some typical dog behaviors.  These folks have to be willing to devote months, or what could be years, to help these dogs have a better life than the one they had before.”

She adds, “When you first meet them, you probably won’t even be able to touch them.  But don’t worry, you’ll never forget the first time that they trust you enough to let you pet them.”

We are seeking very specific people who can devote a lot of time, expertise and patience to helping these dogs adjust to a new life.  If you have extensive experience with dog behavior and are interested in finding out about adopting one of these terriers, please visit our Springfield Adoption Center.  We’re open every day except Mondays from 12:30-5:30pm.

If you can’t adopt, but would like to make a gift to help these dogs learn that the world is not a harsh, scary place, but one that is full of love and safety, please click here.