Carmine DiCenso: Looking Back and Ahead 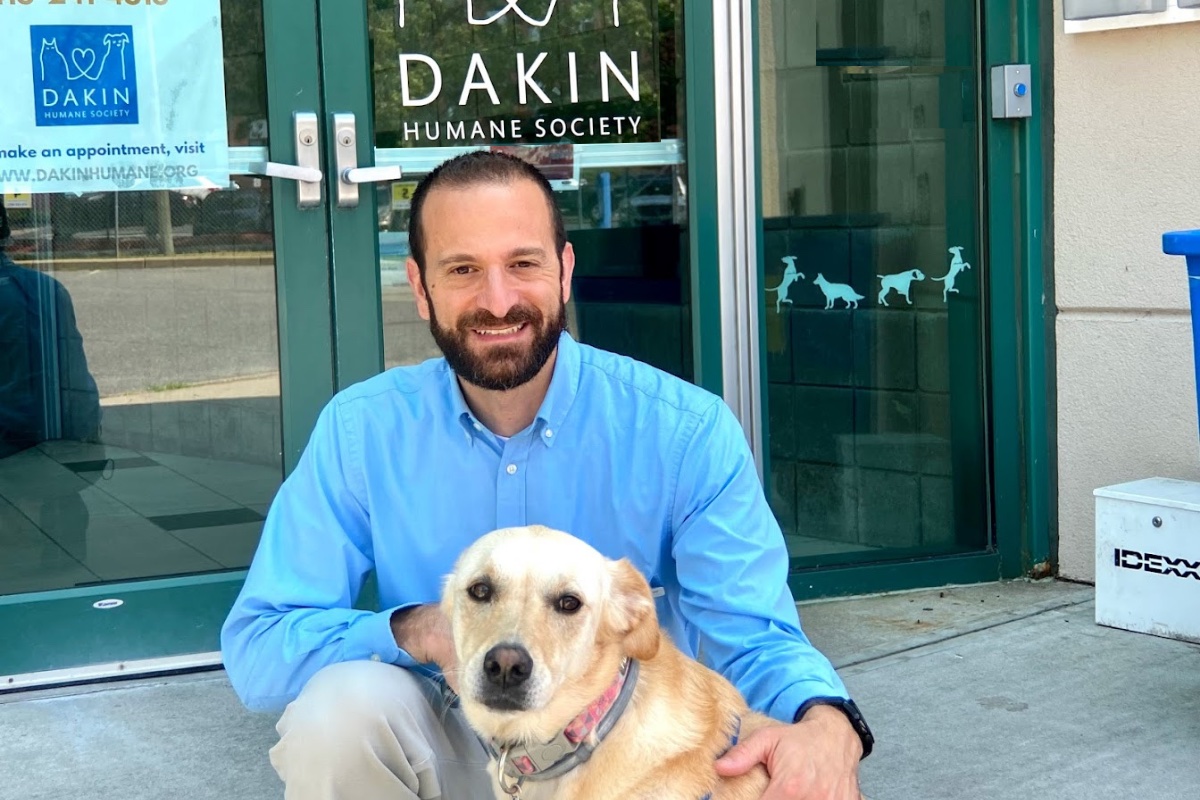 August marks Carmine DiCenso’s fifth anniversary as Dakin’s executive director.  He has worked in animal welfare for more than 20 years, serving most recently as executive director at the Providence Animal Rescue League (PARL) before coming to Dakin.  Carmine serves on the board of directors for both the Association for Animal Welfare Advancement (AAWA) and the New England Federation of Humane Societies.  He is married and the father of three children, and has filled his central Massachusetts home with many pets, including River and Pixel (dogs), Fiona and Bumble (cats), Clyde (chinchilla), Peanut, Butter, Jelly, and Sandwich (mice), Newt (a gecko), and a half-dozen chickens dubbed “The Sinister Six.”  Carmine is very likely Spiderman’s biggest fan.

Q:  Did you have a particular goal in mind when you took the position, and have you achieved it?

A:  I think, for the most part, goals don’t end; they’re about growth and movement.  It’s important to create a supportive culture for the staff and volunteers, and I knew that was already in place when I took the job.  My biggest role is in serving them. Yes, I’m the ‘boss’ but my job is to make sure everyone has what they need to do their work.  The staff of an organization moves it forward, not the leader.  Also, animal welfare is continuing to change.  I knew we’d be looking at fewer animals in our shelter and having to move forward to new things, and we’re pivoting in that direction.  That’s another ongoing goal.


Q:  Dakin has a strong and dedicated community supporting it.  After five years here, what do you think is unique about this community?

A:  I’ve worked and volunteered in many shelters, and I feel Dakin is unique; we have such a supportive and uplifting community.  I think people generally love the work done in animal shelters, but Dakin is different.  The community lifts us up on their shoulders and makes us feel good about the work we do.  They’re our biggest champions.


Q:  After five years here, what do you think Dakin’s strengths are as an organization?

A:  We have hardworking and dedicated people.  The pandemic has been a testament to how resilient, supportive, and positive everyone has remained during one of the most challenging times in our lives.  Our donors show their love for animals in need by generously supporting them as well as Dakin’s programs and services during this really difficult time.


Q:      Of all the duties you perform as executive director, which provide the most happiness and fulfillment, and which are the most challenging?

A:  The biggest challenge in my role is knowing that you have limited resources, and having to make tough decisions on where to focus them to be most effective.  We could splinter our organization into a thousand pieces and try to attack every problem, but Dakin would go away in a day. The most fulfilling thing is knowing the impact of the work we do, seeing the faces of the people and animals we interact with, seeing their joy.  In a world that can focus on negativity, we see a lot of positivity.


Q:  Is there a program that you’re especially proud of?

A:  Any of the programs we’re doing.  I’m proud of the direction in which we’re headed.  For example, the pet food bank – especially during COVID - that stands out right now.


Q:  Where do you see the future of animal welfare, and Dakin in particular, headed?

A:  We see a low shelter animal population, but there are some parts of the country that don’t.  Our growth is in more support services and keeping people and animals together.  We’re a human service agency with a focus on pets.  Animals and people have a symbiotic relationship.  You can’t look at one or treat one without treating the other.  I see our growth in supporting that where we can, in addition to sheltering.


Q:  As a board member of the AAWA, you’re able to connect with people who do your work in shelters nationwide.  How does New England (as a region) compare to the rest of the country?

A:  Being on the AAWA board, I get to meet people from a lot of different organizations and it reminds me how – depending on where you’re from – you’re probably in a different place in animal welfare.  One board person works at a municipal shelter in TX and their focus is on how to help too many animals, while the northwest is similar to New England.  You take for granted that even when a vet or a clinic seems far here in New England, compare it to Texas or Alabama where it’s a four-hour drive.  In four hours you can drive through most of New England.  Another example is that if you live in a warm-weather region, cats breed year-round.  In New England, during winter, cats stop breeding and you get a break.  It makes me appreciate that other places in the country have different challenges, and we have to be respectful of that.


Q:  Speaking of regions, as an eastern MA native, how do you like being a resident of central MA and working in western MA?

A:  I love it out here.  I grew up in Revere, just outside Boston, I lived in Quincy, and I love how it’s spread out here, it’s more private.  I feel that it’s relaxing, peaceful and calm.  This part of the state has so much to offer.

Who would win a fight between Spiderman and Batman?

A:  Batman doesn’t have any superpowers.  He’s smart, and he has all the gadgets, but Spiderman has super strength, can stick to walls, and has his web-shooters.  In an unplanned fight, it’s Spiderman, no problem, within minutes.  But if Batman had time to prepare – and Batman DID beat Superman once – he could have a better shot.  He would have to really do his research on Spiderman to prepare. But if it was them just meeting each other, then fighting…Batman wouldn’t have a chance.